The Edvard Anderson Conservatory is a wonderful place for a visit all year round. Scents of flowers drift through the high-vaulted Mediterranean hall, and in the wings of the house one can stroll through fascinating landscapes from other parts of the world, ranging from lush rainforests to dry deserts. In the tropical sections many crop plants are cultivated, such as coffee, cocoa, bamboo, cotton and many fruits.

Map of the Edvard Anderson Conservatory 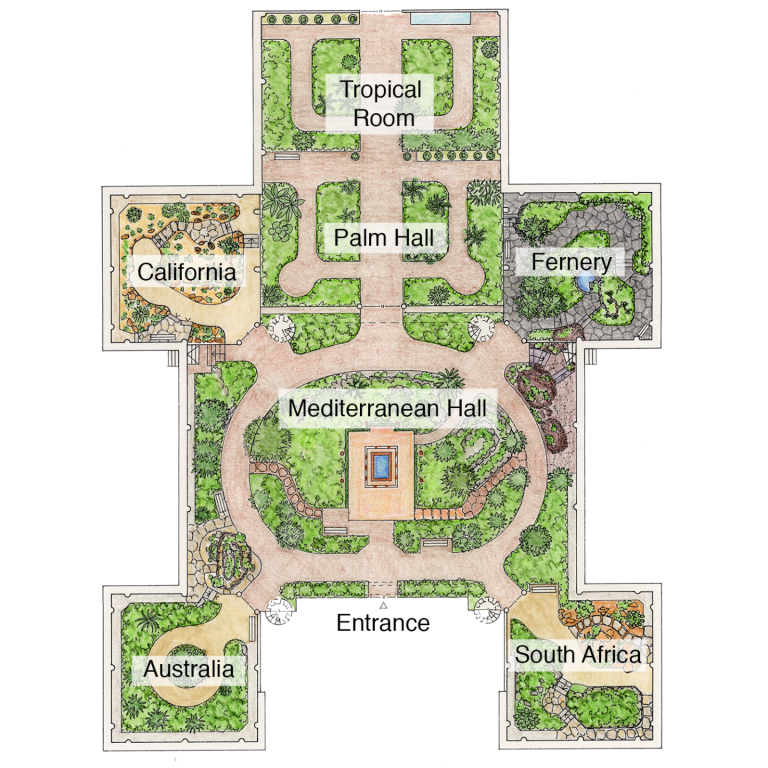 Scents of flowers drift through the high-vaulted Mediterranean hall. In the center is a small patio with a mirror of water laid in Italian marble framed by a low green myrtle hedge and columns of rose-colored sandstone. Here bougainvillea climb close to the old olive tree, accompanied by several other important fruit trees commonly grown in Southern Europe, yielding figs, almonds, oranges and pomegranates. Grape vine is cultivated on terraces of limestone with flowering bulbs of the season growing underneath. The crop plants are surrounded by the native flora of the Mediterranean area, seen in small landscapes. There, forest trees like cork oak and aleppo pine are rising among shrubs forming an almost impenetrable maquis. On the slope close to the dwarf fan palm, brooms and rock roses are flowering beside oregano, sage, thyme and rosemary. 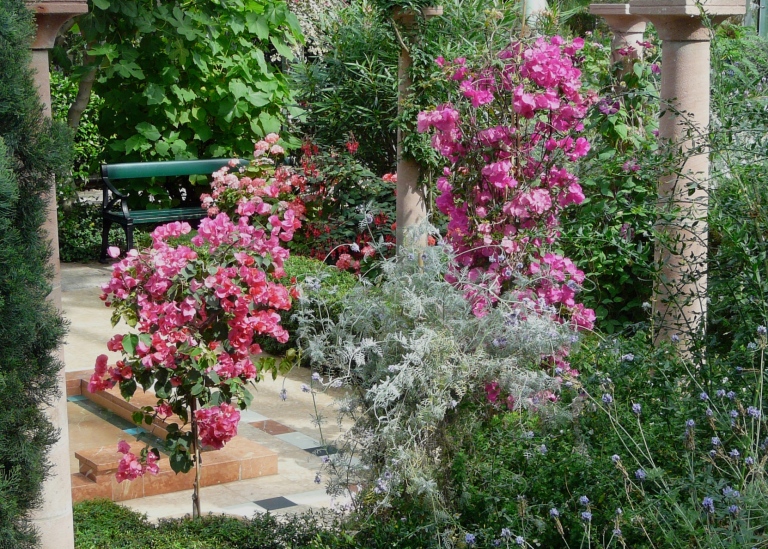 The Californian equivalent to the sclerophyllous (hard leaf) vegetation of the Mediterranean is called chaparral. In the California room are some representatives of the chaparral, but the room is dominated by plants from the Californian and Mexican deserts having a much drier climate. 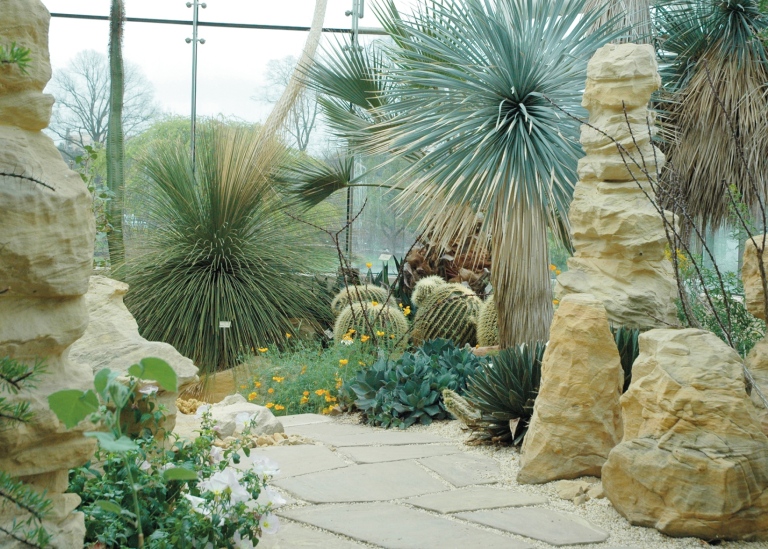 In the fernery the sunlight is filtered through the delicate leaves of tall tree ferns. The lush greenery consists mostly of various ferns, but flowering plants such as anthuriums and bromeliads are also found here. 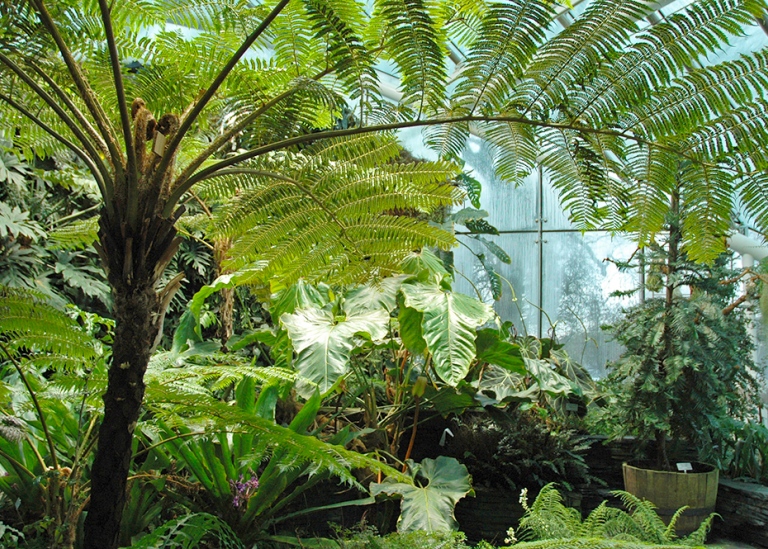 In the fernery the air is cool and moist. Plants from temperate rainforests of Australia and New Zealand grow together with species from South American montane forests. The high humidity favors epiphytes, and the trunks and walls are full of them. Epiphytes are plants that grow on other plants in order to get closer to the sunlight, but without being parasitic. The lush greenery consists mostly of various ferns, but flowering plants such as anthuriums and bromeliads are also found here.

The area around Perth in the southwest corner of the Australian continent has a Mediterranean climate. There, heat waves sweep in from the nearby desert areas and bush fires are common. 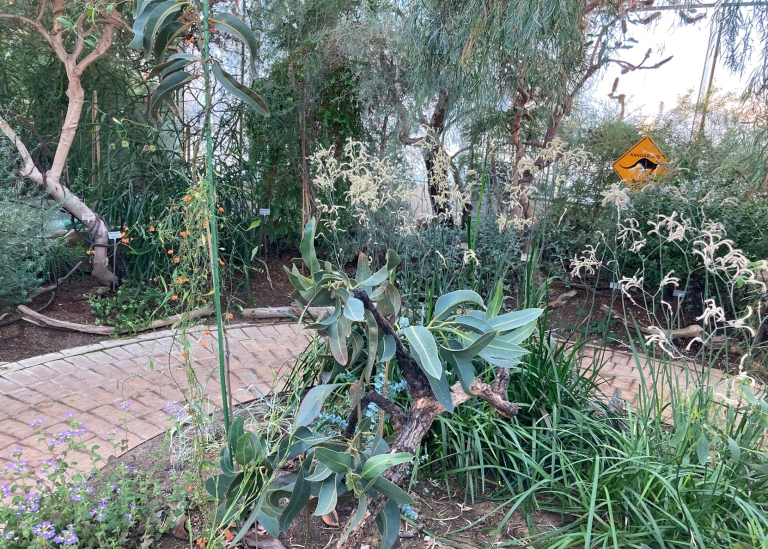 The landscape of southwest Australia is flat and sandy. It is dominated by dense thickets (kwongan) and low eucalyptus forests (mallee) with few herbaceous plants. Species richness is still huge, with over 8,000 plant species. During the hot period the vegetation looks dusty and grey from a distance. The leaves are typically small and hard and are protected from evaporation by a thin wax layer, giving the leaves a grey shade.

In the Australia Room are many representatives of the area's most important plant families, including eucalypts, acacias and the characteristic grass tree (Xanthorrhoea). During winter and spring the bushes are starred with flowers and the acacias spread pleasant fragrances in the room.

A region near the southern tip of South Africa, known by plant geographers as the Cape Floristic Region, has a very rich and distinctive flora with 8,550 plant species, of which two thirds occur only in this region. The South Africa room presents two different types of vegetation from the area: fynbos and semi-desert. 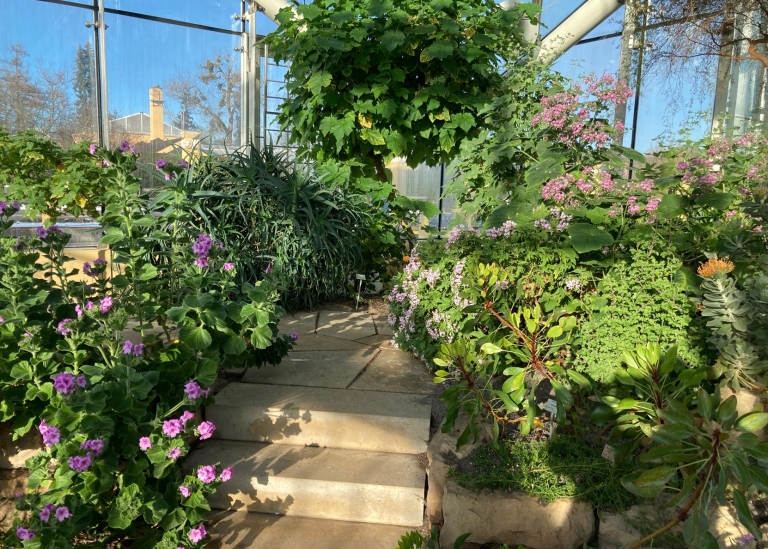 Most of the Cape Floristic Region is covered by a shrubland known as fynbos. It is similar to the flora of the Mediterranean, with shrubs that have small and hard leaves adapted to withstand the warm and dry summer. Plants such as proteas, restios, geraniums and members of the heath family are common here.

A semi-desert region named Karoo extends to the northeast of the Cape. This extremely dry area has a flora with many species capable of storing water in the leaves or stems, known as succulent plants. Among the succulents found in the South African room are spurges, aloes and living stones (Lithops).

In the humid tropical Palm Hall, bananas, papaya and palm trees thrive among the lianas and aerial roots of the rainforest plants.

In the lofty hall with a damp, warm climate all year round one is met by a lowland rainforest. Here, mahogany, ficus, palms, banana plants and the giant bamboo quickly shoot up towards the ceiling. Lianas, like the chestnut vine, monsteras and rattans, climb to the same height. Tangled heaps of epiphytes in the tree crowns and aerial roots touching the ground complete the picture. Cacao and papaya trees are also cultivated here together with different species of the diverse coffee family, such as antplant (Myrmecodia), ixora and gardenia. 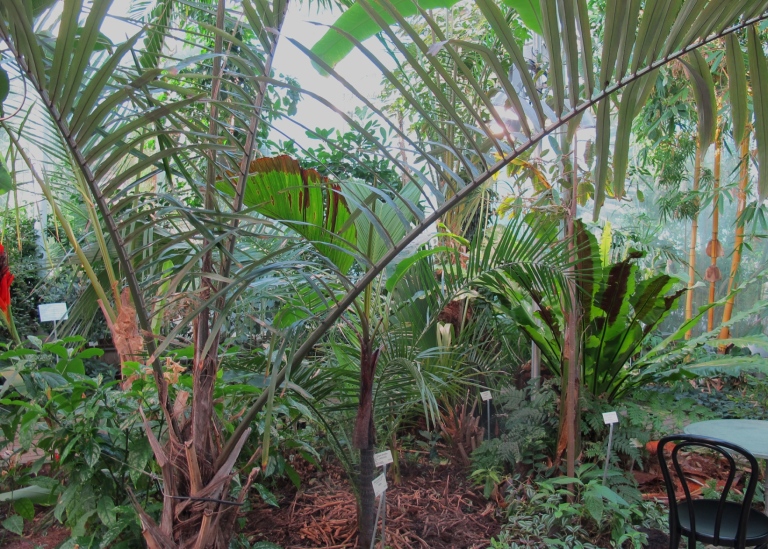 The Tropical Room houses a collection of cycads, exciting insectivorous plants, and many economically important plants.

In the tropical section mainly utility plants from warmer countries are cultivated. Fruits, like the tree tomato, guava, passion fruit and lime ripen here. Herbs, textile plants, tea and coffee do well. One half of the room is dominated by cycads, an ancient group of plants retaining primitive features, and the bizarre desert plant Welwitschia has been given a dry spot with extra light in order to thrive. In a bed of sand and moist bog moss, the insectivorous pitcher plants, sundews and butter worts are cultivated – fascinating plants able to digest insects and absorb the nutrients. In the glass case nearby orchids are on display throughout the year.